Amazon FSx for NetApp ONTAP: One Year In

Amazon FSx for NetApp ONTAP (FSx for ONTAP) delivers shared file and block storage coupled with a rich set of capabilities as a native, fully managed AWS service. As we’ll see in this article, it’s a fully-fledged member of the growing AWS FSx family.

It’s been only about a year since the service was first announced and in that year a lot has happened. Today FSx for ONTAP is a standard for many organizations, from all types and industries, seeking a storage service that would meet their evolving storage demands on AWS.

So, what happened? Many new features were introduced, the ecosystem grew significantly, major certifications achieved, major new customers have signed on to use the service, and NetApp BlueXP has made FSx for ONTAP management more streamlined and comprehensive.

In this blog we are going to take a closer look at each of these achievements and take a look ahead at where the service is going.

Use the links below to jump down to the sections on:

One of the major developments in FSx on ONTAP is the new single-AZ high availability deployment option.

In the background, this works very similar to the multi-AZ highly available configuration setup, but it only leverages a single AZ instead of two. In this case, the AWS infrastructure powering the file system resides in separate fault domains.

The single-AZ high availability deployment option is ideal for use cases that don’t have strong data resilience requirements, such as development or testing environments and applications that maintain secondary copies of their data. This option significantly lowers costs while allowing the same level of data management capabilities and features, all while providing sub-millisecond latency and IOPS in the hundreds of thousands.

In both HA configurations, single-AZ and multi-AZ, if one node fails, the second node is ready to assume full operation in a seamless manner that is non-disruptive to the end users. In the case of single-AZ, it also ensures better latency because all the data resides close together in the same zone, and lower costs since less throughput and IOPS are required.

When FSx for ONTAP was first introduced, file systems created by the service had a fixed SSD base capacity for the performance tier. This tier hosts the data that is frequently accessed by your workloads. Now, users can easily increase the size of their file system SSD storage tier as much as they want from 1 TiB to 192 TiB, allowing users to quickly address storage needs.

In addition to the expanded SSD storage size, the IOPS level of FSx for ONTAP file shares can now be scaled up to 80,000 IOPS per file system. This replaces the original, static IOPS level for new file shares. With the ability to scale the IOPS level up (or down) on demand, users can now easily adapt to their workloads’ IOPS requirements by changing the file system’s IOPS level on the fly.

FSx for ONTAP now lets users vary the throughput capacity for file systems. This is a big change from the original behavior of the service, where once the file system was created, the initially selected throughput stayed in place for that file system for the length of its existence.

Since throughput capacity is essentially the bandwidth provided by the file system, the ability to change it is a huge advantage. There are currently five different throughput levels supported that can be changed on the fly, meaning you can right fit the size of your system for changing workload performance requirements.

This can be a major benefit to deploying a cost-effective Software Defined Data Center (SDDC). Now users can scale out their deployments on a long-term basis or burst storage heavy workloads without the added expense of adding unnecessary compute instances. That, plus all of the additional ONTAP-based data management features that come with FSx for ONTAP, gives a lot more flexibility to the VMware Cloud on AWS experience.

ParallelCluster helps provision and manage high performance computing (HPC) clusters on AWS. Support for FSx for ONTAP adds some critical flexibility for customers looking for a shared file system that can address their throughput or IOPS (or both) requirements.

Read more about the 3.2 release of ParallelCluster here.

Two launch wizards on AWS were integrated with FSx for ONTAP functionality, making FSx for ONTAP directly available from the very start of the resource provisioning process on AWS. 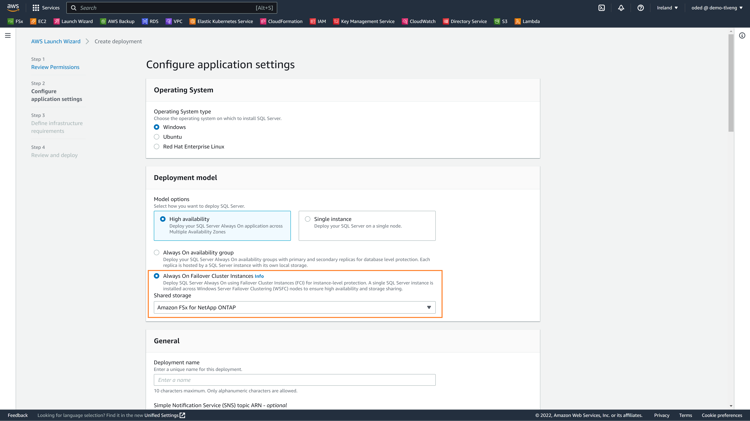 The second wizard that adopted FSx for ONTAP as part of its provisioning process is the EC2 Launch Wizard. This means that every time an EC2 instance is being provisioned via the wizard, FSx for ONTAP will be an option for the storage layer.

Both of these options make FSx for ONTAP directly launchable and attachable directly through resource provisioning routines on AWS, making it more accessible and easier to use.

Since AWS Backup serves many different AWS workloads, protecting FSx for ONTAP can be a seamless part of an AWS deployment.

Having a data mobility capability at your disposal for quick and secure workload migration is a central requirement for any organization. To help users migrate and transfer data to and from FSx for ONTAP, support for FSx for ONTAP on AWS DataSync.

With AWS DataSync, data stored on-prem, in the cloud, or in an edge location can now easily be migrated to FSx for ONTAP. AWS DataSync also supports data movement between FSx for ONTAP shares and other AWS services, including other services in the FSx family, Amazon EFS, and Amazon S3.

Data transferred by DataSync is encrypted end to end, and all the files are transferred along with their folders and metadata. Additional features include scheduling, filtering, and access to metrics via Amazon CloudWatch.

Read more about FSx for ONTAP support for AWS DataSync

Expanding certification for OpenShift via ROSA is significant because it gives developers working with OpenShift to orchestrate container-based applications on AWS a trusted way to provision fully managed, AWS-native persistent file and block storage for their workloads. It also allows those users to gain ONTAP’s robust data management capabilities for their container workloads, including enhanced data protection, high availability, and cost efficiency.

Read more about Using FSx for ONTAP to Enhance Kubernetes and Container Capabilities.

AWS SaaS Boost now supports using FSx for ONTAP as the file system storage for applications that are transitioning to the SaaS model.

AWS SaaS Boost is an open-source technology from AWS to help transition traditional applications into SaaS-based offerings. This software offers a way to migrate existing applications to AWS and provides useful functionality for getting SaaS offerings off the ground.

Streamlined and Comprehensive Management with BlueXP

As with any storage system based on NetApp technology, NetApp BlueXP provides FSx for ONTAP customers with a centralized storage operations platform to manage their file systems across AWS or any NetApp-based storage system they own.

Complementing the native-AWS management tools and APIs, BlueXP offers unique capabilities for FSx for ONTAP, including:

BlueXP is constantly evolving, making it an attractive and robust option to deploy and operate FSx for ONTAP. Here are some of the recent enhancements:

BlueXP makes it easy to discover your existing FSx for ONTAP clusters and present them on the Canvas. Once an FSx for ONTAP file system is discovered, it’s fully manageable through BlueXP.

In the image below you can see that there are two FSx for ONTAP clusters available, (alongside an Amazon S3 bucket). They can all easily be managed from this single pane of glass. 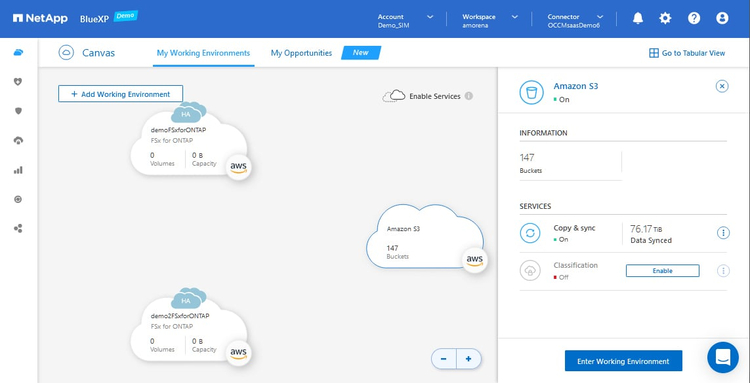 From the Canvas, you can enter into each FSx for ONTAP file system and get access to basic and advanced volume management options. There you can manage specific volume attributes, set policies for Snapshot copy frequency, tiering, and perform many other storage optimizations. 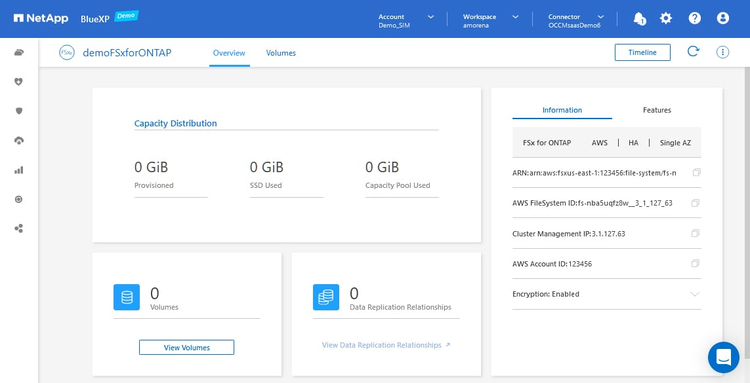 BlueXP makes it much easier to provision volumes and set up access using any of the protocols supported by FSx for ONTAP file systems: NFS, SMB/CIFS, or iSCSI. 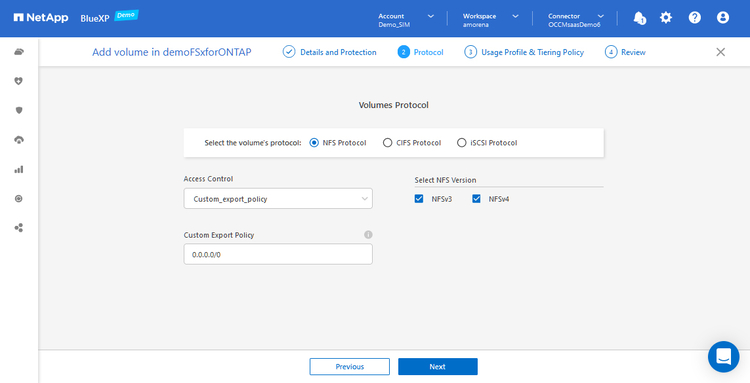 The added value to this is that you use a single management tool to manage all available protocols. That aligns with the way BlueXP handles multiprotocol management for other ONTAP services and products.

To better protect your data on FSx for ONTAP, BlueXP makes it possible to carry out cross-region replication, making sure that there is a copy of the data stored in a distinct AWS region, which limits the chance for data loss. If one region goes down, BlueXP makes it easy for you to fail over to the secondary copy of your data stored on FSx for ONTAP located in another region.

Learn How to Set Up FSx for ONTAP Using BlueXP.

In the first year since its debut Amazon FSx for NetApp ONTAP has extended support to include many critical AWS services and has become fully part of the built-in AWS service offerings in ways that make it accessible to users right from the start.

With the growth FSx for ONTAP has shown over the last year, it’s no wonder that many organizations have turned to it as a central part of their enterprise IT deployments. You can read about several FSx for ONTAP customer success stories here.