OpenShift Container Platform is a private platform-as-a-service (PaaS) for enterprises that run OpenShift on public cloud or on-premises infrastructure. It runs on the Red Hat Enterprise Linux (RHEL) operating system and functions as a set of Docker-based application containers managed with Kubernetes orchestration.

In this article, you will learn:

OpenShift is a Docker-based system intended to help developers easily construct applications. It is a layered system that abstracts the creation of Linux-based container images. Cluster management and orchestration of containers on multiple hosts is handled by Kubernetes. 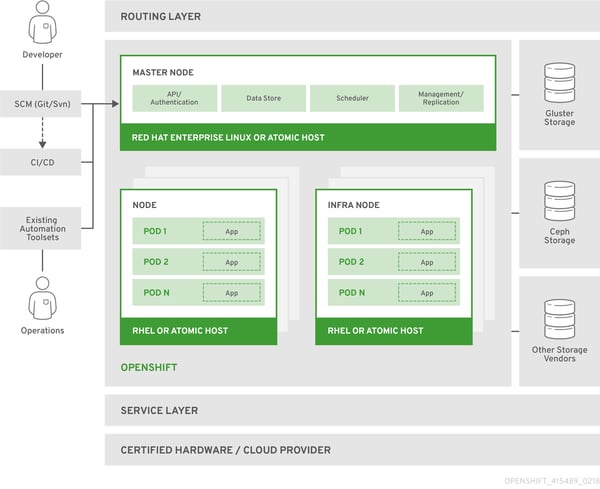 The OpenShift Container Platform is composed of microservices—some of these are REST APIs, which provide access to core objects, and controllers, which perform changes to containerized workloads and report on status. These microservices run in Kubernetes cluster and store object data in etcd.

Calls to the REST API can change the state of the system. Controllers read the desired state sent to the REST API, and then apply changes to the object accordingly. For instance, a user creates a "build" object, and the build controller sees the request and executes it. When the build is completed, the controller updates the status of the object through the REST API.

This pattern allows you to extend much of the functionality in OpenShift Container Platform, and you can customize how builds are run independently of how images are managed. Customizing the controllers enables different behaviors based on the logic you set.

You can use the API to script common administrative actions, which are controllers that monitor the state or execute changes. It is also possible to leverage containers to perform system changes based on an event stream of user activity, dynamically adjusting workloads to actual loads and requirements.

Both Red Hat OpenShift and Kubernetes are popular platforms for running containerized applications. As we described above, OpenShift is, at its core, based on Kubernetes, but adds additional capabilities on top of basic Kubernetes features.

OpenShift uses Kubernetes as its foundation, so it shares the same core principles. To deploy containerized applications across server clusters, the user writes configuration files that define how the applications should deploy. Both Kubernetes and OpenShift support the YAML and JSON configuration languages and offer load-balancing and routing capabilities. You can run either platform on-premises or in the public cloud.

Kubernetes distributions typically use kubectl as the primary command-line tool for managing clusters. The OpenShift command line is oc and is similar to kubectl but offers additional features to simplify complex administrative tasks.

Kubernetes is compatible with a variety of logging tools, so users can choose how they manage logging. In OpenShift, log management depends on EFK (Elasticsearch, Fluentd and Kibana). Kubernetes offers a dashboard as an add-on, which is not a core part of Kubernetes. OpenShift has a web management console built in.

Just before the start of AWS Re:Invent 2020, the industry was abuzz with word that Red Hat and AWS were joining forces to produce a new OpenShift service targeted for AWS users: Red Hat OpenShift Service on AWS, or AWS ROSA for short. This new service is built to integrate AWS with OpenShift’s hybrid cloud management capabilities to extend on-premises workloads to the cloud, AWS in particular.

But this isn’t the first service of its like for the public cloud. AWS ROSA is very similar to the competing service on Azure, Azure Red Hat OpenShift. What do both of these services offer hybrid cloud users in terms of features, benefits, and challenges? In this post we take a look at both OpenShift services on AWS and Azure and how they are making hybrid cloud management easier.

With the rise of hybrid and multicloud deployments, Red Hat OpenShift has become a key technology to orchestrate complex, enterprise-level architectures. But there’s more to this technology than just being an alternative to native Kubernetes. What don’t you know about using OpenShift?

This blog looks at five major OpenShift benefits that you may not have heard about before. Find out what they are, and how they can help your deployment.

Red Hat OpenShift provides users with an open-source Kubernetes environment that is developer focused to drive application development at the enterprise scale. But the storage element managed through Gluster can increase the complexity. Cloud Volumes ONTAP offers a solution.

This article shows how Cloud Volumes ONTAP removes the complexity around provisioning storage for OpenShift Kubernetes clusters, removing the need for users to manage complex solutions for storage, such as Gluster. A full instructional walkthrough shows you how to do it.

The OpenShift Container Platform is designed as a microservices-based architecture, running on a Kubernetes cluster. Discover core concepts of the Red Hat OpenShift Architecture, including services, builds and image streams, and learn about OpenShift layers and components.

Kubernetes is an open-source container orchestration platform. OpenShift offers a set of containerization solutions designed by Red Hat, which is based on Kubernetes. Learn about key differences between Kubernetes and OpenShift, including ease of installation, user interface, security, templates, and networking.

How does one of the largest banks in Europe tackle the demands of its highly DevOps-centric approach with containerized workloads running on OpenShift and integrated with Ansible, Terraform, and Kafka? With the help of Cloud Volumes ONTAP.

In this blog we take a look at the case study of this institution and how it is using Cloud Volumes ONTAP in an innovative architecture that requires capabilities for Kubernetes, IaC, hybrid and multicloud usage.

Together with our content partners, we have authored in-depth guides on several other topics that can also be useful as you explore the world of open Source.