Data Transfer Fees: As Inevitable as Death and Taxes

A fellow cloud architect sent me a text today about the NetApp® Cloud Volumes Service and egress charges. His customer has an application that had already been moved from on the premises to a competitor’s cloud file service, then moved once again to one of our own NetApp Cloud Volumes ONTAP® clusters. Because neither environment had been up to the task, the architect wanted to bring Cloud Volumes Service to bear.

“A customer of mine is looking at moving their application to Cloud Volumes Service. The workload is pretty intense, so I’m concerned that the egress charges will make it too expensive….”

Egress Fees? How About Transfer Fees?


It’s well understood that Amazon Web Services (AWS) charges a fee of $0.02 per gigabyte on egress through AWS Direct Connect and that ingress is free. So, for the rest of this blog post, I will instead focus on a more interesting data transfer scenario: Inter-Availability Zone transfer. I will also compare the transfer fee to the Direct Connect egress fee.

From scale-out, shared-nothing applications such as MongoDB and Cassandra to scale-up applications such as Oracle Database with Data Guard, the $0.02-per-gigabyte charge is hard to escape in AWS. You incur this charge even with AWS services such as RDS and Redshift. So, you pay it one way or another, as I will show later in this blog post. Data transfer fees, they’re as inevitable as death and taxes!

But these fees are just a part of the cost of running your business. More important than these fees is your TCO. That’s where NetApp Cloud Volumes Service can help.


Let’s take a file read as an example:

Now let’s look at another example, a file write:

What does it all mean? It means that egress alone is charged over Direct Connect, but both ingress and egress are charged when that transfer involves Amazon EC2 instances that are placed across Availability Zones in the same region.


What are examples of applications that are affected by this charge?

Any application that both requires locally attached storage and has a need to communicate with Amazon EC2 instances in another Availability Zone incurs this charge. Example scenarios include applications with a replication component such as MongoDB, Cassandra, and Oracle with Data Guard: 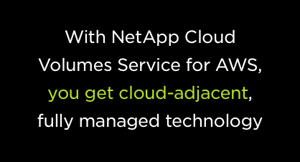 Pay Your Dues but Still Lower Your TCO


You just can’t escape the $0.02-per-gigabyte charge in AWS. You pay it for scale-out, shared-nothing applications such as MongoDB and Cassandra, and you pay it for scale-up applications such as Oracle Database with Data Guard. And you have to pay it even for AWS services such as RDS and Redshift. You either pay $0.02 per gigabyte for egress, or you pay $0.01 + $0.01 per gigabyte for receiving and sending in Inter-Availability Zone transfers.

When you’re choosing which technology to deploy to meet your business needs, you might find solutions that are optimized for this issue, but, mostly, this issue is ignored. Like death and taxes, this charge is going to get you one way or another.

After reading this blog post, I hope that you can better understand the data transfer fees that are associated with doing business in the AWS cloud. The line items on your bill might be interesting, but they’re frequently misleading. It’s your TCO that matters, so consider this information your call to action.