One Cloud Out of Many: Why Enterprises Are Turning to Multicloud and Hybrid Cloud Architectures

There are many motivations for evolving from an entirely on-prem infrastructure to a multiple or hybrid cloud architecture. From the very beginning of the cloud adoption process, hybrid cloud architectures allow enterprises to benefit from cloud economics and scalability without compromising data sovereignty. A multicloud storage deployment also brings many benefits to the enterprise cloud, from avoiding vendor lock-in to accommodating mergers and acquisitions and optimizing price/performance.

In this blog post, we’ll look at everything related to multicloud/hybrid architectures: the use cases best served by them, the challenges of hybrid and multicloud management, how Cloud Volumes ONTAP helps to make both options easy and cost-effective, including customers case studies.

Multicloud and Hybrid Architectures: A Primer


Both multicloud and hybrid are distributed deployment models in the cloud, for running an app—or part of an app—in the most appropriate computing environment.


Multicloud is the use of cloud computing and storage services—IaaS, PaaS, SaaS—from two or more public cloud vendors in a single network architecture. A multicloud strategy avoids vendor lock-in, enhances business continuity, and maximizes flexibility for development teams. However, multicloud management can be complicated, requiring careful orchestration as well as close attention to security and governance issues.

What is Hybrid Cloud?


A hybrid cloud combines a privately-hosted cloud with at least one public cloud service provider, all managed as a single, policy-based environment. In a hybrid enterprise cloud deployment, on-prem infrastructure is extended by public cloud resources in a wide range of use cases such as dev/test, backup and archiving, bursting production workloads to meet sudden demand, and more. A common reason for using a hybrid environment is as a transition to a full cloud deployment.

Both major cloud providers are catering to this new demand. For AWS, hybrid cloud deployment can use AWS Storage Gateway and many of its other services. Not to be left out of the shift to the hybrid cloud, Azure also offers a solution: StorSimple. In addition to those native hybrid solutions, many AWS and Azure services can also be used in hybrid deployments with the help of Cloud Volumes ONTAP, which we’ll discuss later.


When it comes to either deployment model in the cloud, whether hybrid or multicloud, there are two main types: distributed and redundant.


In redundant architectures, the same app or app components will be deployed across multiple computing and storage environments in order to increase capacity or resiliency. This kind of architecture is often adopted by companies just starting to use the cloud, as it allows them to gain experience with the platform before they go all in. In a redundant architecture, there is usually no need to refactor or rewrite code and processes. Instead they can be lifted and shifted “as is” to the cloud infrastructure. Some examples of redundant deployment include:


According to RightScale’s 2018 State of the Cloud Report, over 80% of North American and European companies are using a complex deployment model in the cloud: 51% of them hybrid and 21% implementing a multicloud strategy, with an average of 5 cloud providers. 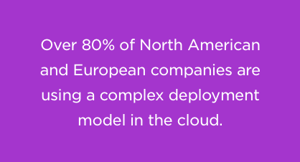 Multicloud and hybrid cloud strategies offer compelling benefits to enterprises. Perhaps one of the greatest benefits is flexibility. These strategies give enterprises the freedom to choose where and how to deploy workloads, thus avoiding the business risks of vendor lock-in. Multicloud and hybrid cloud also promote more flexible data management, for enhanced data sovereignty and compliance, availability, and durability.

For enterprises that seek to achieve maximum business agility through a DevOps culture, a hybrid cloud strategy is pretty much a prerequisite. At the very least, it provides self-service resources for developers to cost-effectively run dev/test workloads in the public cloud.

Another important benefit is price/performance optimization across providers (in the case of multicloud) and across use cases (in the case of both hybrid and multicloud). Although it may seem that pricing and performance are very similar across all the major public cloud providers, careful multicloud and hybrid cloud management can help to contain costs without sacrificing performance by deploying the right workloads in the right environments.

Another clear benefit from a multicloud approach is the ability to geographically distribute apps and services. The closer an app sits to its target audience, the better the user experience. Leveraging regions across multiple cloud providers contributes to optimal performance—and also supports effective use of edge computing.


Despite the many benefits, multicloud and hybrid cloud deployments are not without their special challenges. These include:

Other ways in which Cloud Volumes ONTAP supports multicloud and hybrid cloud architectures include:


This American multinational mass media enterprise owns and operates multiple branded websites of its own and distributes digital content, products, and services to consumers, publishers, and advertisers worldwide.

The company was looking for an agile, enterprise-grade data storage management solution to establish a hybrid cloud data center as well as to migrate large volumes of data from Europe to the Western United States. They implemented a highly-available redundant hybrid architecture based on Cloud Volumes ONTAP for AWS, and report these benefits: