If you haven’t heard the news, NetApp ONTAP Cloud has been rebranded as NetApp Cloud Volumes ONTAP. Along with the change comes exciting news of the release of support for ONTAP 9.4 – which in Amazon brings significant increases in front end performance. How cool is that, for once something really is both “New and Improved.”

The most significant addition to the ONTAP 9.4 release for Cloud Volumes ONTAP is the inclusion of support for enhanced networking for the software defined storage system. As described by Amazon: 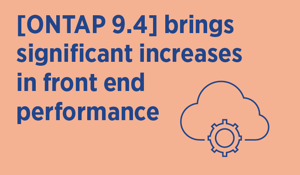 Keep in mind that there are two types of enhanced networking interfaces supported by AWS and that NetApp supports at present the former (VF).

The following graph calls out the increase in performance introduced by upgrading from ONTAP 9.3 to ONTAP 9.4 on an active-passive HA pair based on the c4.8xlarge instance type. Using the SLOB2 workload generator and Oracle 12.2c, we performed a 75% read 25% update workload using an 8K database block size. While the read I/O rate increased 25% simply by upgrading a Cloud Volumes ONTAP cluster, the latency reduction is even more impressive.

The upgrade path from ONTAP 9.3 to ONTAP 9.4 is a breeze with the Cloud Manager. The Cloud Manager takes care of everything from upgrading the Cloud Volumes ONTAP nodes without downtime (assuming your environment is running in an HA configuration) to enabling sriov-net-support on the instances. It's as simple as clicking on the “New version available link” below and checking yes on a few “I have read and acknowledge the above.”