NAS Backup: Key Considerations for Enterprise Deployments
NDMP: A Brief History, Architecture, and Common Topologies
NDMP Backups Too Slow?: How to Shorten Your Backup Window
Direct Backups: Why You Should Forget About Indirect Backups

Backup data is a must-have insurance policy for any organization. But backup systems that rely on media gateways can be too slow and insecure to create reliable copies. That kind of delay can lead to missed backup windows. For critical NAS backups, you’ll need a more reliable backup solution.

In this blog, we’ll look at common challenges associated with indirect backup architectures along with how NetApp’s direct backup solution—Cloud Backup—can help address these challenges. 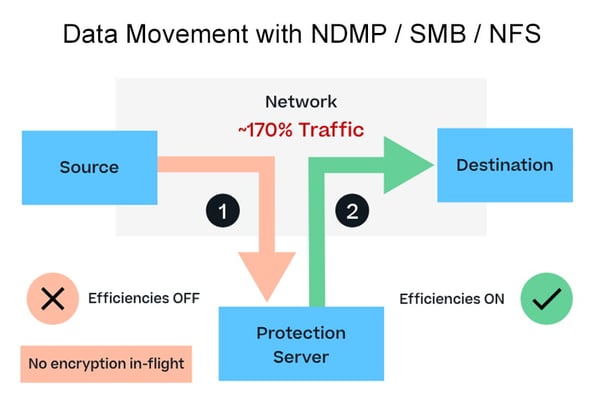 When the data size is small, this kind of architecture likely won’t pose a significant challenge. However, as the data estate grows, additional overhead is required for the backup process for a few reasons:

Considering the above facts, using a media gateway for backup is like using Robocopy to replicate data between locations in typical backup architecture. There are no further storage economies, security, or performance advantages. For organizations with large data estates, this would significantly lower the overall ROI.

NetApp Cloud Backup helps address the above backup challenges for your on-premises ONTAP storage solutions as well as in the cloud. Data is stored directly in object storage in AWS, Azure, Google Cloud, or in the on-prem NetApp StorageGrid® appliance. NetApp Cloud Backup provides a quick and easy way to create backups of ONTAP NAS storage while preserving all the storage efficiencies offered by the platform.

Cloud Backup provides you with an option to back up data from ONTAP directly to object storage, eliminating the requirement of a media gateway. 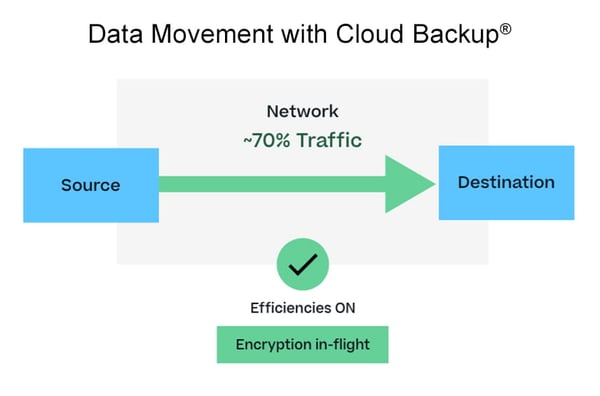 There are a number of benefits to direct backups with Cloud Backup:

No loss of ONTAP storage efficiency: As the media gateway is eliminated in the Cloud Backup architecture, it helps preserve storage efficiencies natively offered by ONTAP through features like deduplication, compression, and compaction. Combined with the incremental-forever approach for backups, it generates less than 70% of network traffic compared to NDMP-based backups and is also 100 times faster.

Automated backup creation: Incremental backups from block storage to object storage are enabled in the backend through NetApp’s Snapshot™ and SnapMirror® data replication technologies. These features are used transparently to create backups and transfer them between ONTAP systems.

Cloud Backup’s SnapMirror Cloud functionality is orchestrated centrally from Cloud Manager. This allows for a SaaS-based single-pane management option for the ONTAP suite of products. You can schedule and manage backups of your heterogeneous ONTAP infrastructure both on-prem and in the cloud directly from the Cloud Manager interface.

Faster, more reliable backup creation: Scanning and backup times in NetApp Cloud Backup are decreased compared to NDMP-based backup solutions. This reduces the backup window significantly, even for larger data sets, speeding up the process and ensuring your backups are always up to date. Faster backup cycles help increase backup frequency and eliminate the concern of skipped backups, thereby ensuring that you can meet your recovery point objectives.

Granular restore: As the backup process is block-based, your data recovery can also be more granular, so only the data that needs to be restored is transferred.

Cloud Backup will help you get rid of clunky media gateway-based backup systems and allows you to take advantage of using object storage directly as a backup target. Additionally, you can also reap the benefits of enhanced security features, indexed catalog-based search, ransomware protection through immutable backups, along with a wide range of supported workloads, all provided as a managed service from NetApp’s Cloud Backup.