To leverage Amazon S3’s full potential for Big Data analytics, data querying, and business intelligence, you need all of your on-premises and cloud-based data sets to stay synced at all times.

Trying to manually build a system that can handle all of the moving parts of a data synchronization process can be a time-consuming and complex task.

NetApp Cloud Sync addresses all of these challenges in one easy-to-use, service-based solution. Cloud Sync is highly effective for rapidly synchronizing data transfers between either NFS or CIFS file shares and Amazon S3 buckets, and vice versa.

Using both the RESTful interface and a browser-based UI, Cloud Sync is a solution all key IT team members and administrators can use to their advantage.

There’s a lot to get to know about Cloud Sync. Cloud Sync differs from tools such as rsync, S3cmd, and rclone in more than just performance and speed—Cloud Sync’s real advantage is its service-oriented features.

The ability to sync up with multiple endpoints allows Cloud Sync to implement data synchronization from NFS or CIFS shares. Whether stored in the cloud or on-premises, Cloud Sync gets data to Amazon S3 buckets, or back from it, quickly, securely and reliably.

Cloud Sync is made possible by two separate component functions:

The transfer between the file share and Amazon S3 is handled by the Data Broker instance, while the usage features are all part of the Cloud Sync service.

Since Cloud Sync can be installed on-premises or provisioned on AWS VPC, you have the option to decide how to safeguard your data. By making it possible to install on-premises, there is no risk of exposing sensitive file shares to the open internet.

How Does It Work?

To use Cloud Sync to synchronize between data in one source and a destination, you begin by starting “Sync Relationship.” Cloud Sync has a wizard that steps in here to make all of the sync options available to you.

Here is where you can choose or set up the Data Broker that will carry out the sync itself, giving it access to either the NFS or CIFS file share in which you have the data you intend to sync. Synchronization starts immediately once the Data Broker is set up.

Cloud Sync’s speed advantage is really noticeable here, as it uses a parallel process to work with the source files. This gives processing throughput a real boost.

Once the initial baseline is in place, all further changes get processed on their own.

Time is an important factor when it comes to rapid data analysis. Synchronizing data transfers and migrating data to the cloud can be a slow process. Cloud Sync’s major strength is its speed.

It does a better job at syncing data faster than other tools in the data transfer field because it processes the source files in parallel.

But there’s more to Cloud Sync than its speed. Besides its performance stats, what makes Cloud Sync unique are its features.

What does Cloud Sync do that other data transfer tools don’t?

Compared to rsync and the other sync methods like it, Cloud Sync is more of a service than a tool. It does a lot more than just perform synchronization operations: it has features that allow you to fully manage and leverage that data.

Every step of the synchronization process can be addressed with Cloud Sync’s help:

Syncing between Amazon S3 and multiple endpoints is no challenge with Cloud Sync. No matter where you keep your data, Cloud Sync gets it to Amazon S3.

Supporting both NFS and CIFS, Cloud Sync isn’t frozen out from data sources the way other tools are. And the data can come from any system that uses the Amazon S3 protocol, including NetApp storage appliances such as StorageGRID WebScale.

StorageGRID WebScale is a software-based system for making highly available enterprise-grade object storage node grids. Storage configurations such as this are helpful when it comes to compliance with regulations that restrict public cloud use.

And where privacy concerns are a factor. Cloud Volumes ONTAP (formerly ONTAP Cloud) can also manage storage in the AWS cloud, backed by Amazon EBS storage, which can also be synced with Amazon S3.

Since NFS is a Unix and Linux utility, and CIFS is proprietary to Microsoft, Cloud Sync’s ability to use both makes it flexible. Many platforms may make use of both types of file shares—having one way to sync and consolidate from all of those sources is a real benefit.

Cloud Sync has a graphical user interface that is web-based and easy to use. From this dashboard you can manage multiple synchronization operations, analyze transfer status, and audit logs of past sync operations.

There are also controls to manage syncs, set up scheduling, and calculate usage costs. This is the focal point of the entire Cloud Sync service, without any of the complications involved with managing other solutions. 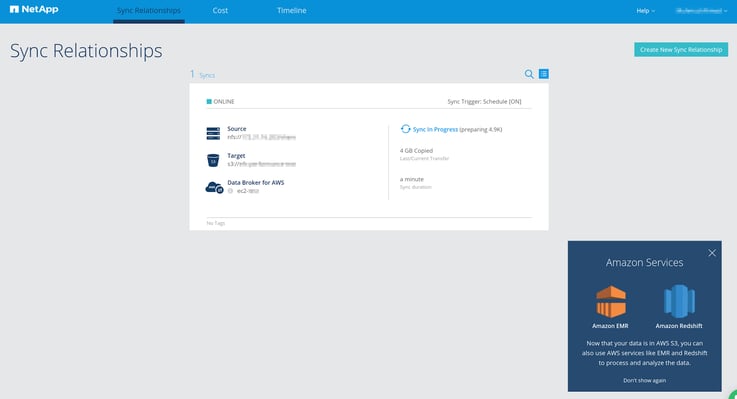 The UI is intuitive and can be set up with the help of a wizard that will walk you through the process of creating Sync Relationships and Data Broker instances. There aren’t complicated configurations to define on your own before you get started. Once Cloud Sync is in place, it is ready to get running.

Your on-premises data needs to get into the cloud.

Not only does it confuse important analytics, it undermines the efficacy of using a hybrid architecture deployment.

Cloud Sync is made to ensure that that information stays synced and remains accessible from any file share format system no matter where you keep it stored.

Find out more in this Cloud Sync white paper and try Cloud Sync for yourself in a free 14-day trial.