After a long stretch as a dependable way to back up and restore data, NetApp AltaVault is reaching EOL. NetApp recommends that all AltaVault users switch to NetApp Cloud Backup as their NetApp AltaVault replacement for cloud backup services.

In this post we’ll take a look at what makes Cloud Backup the best way to replace AltaVault. Read on as we cover:

Why Your AltaVault Backup Method Needs to Be Replaced

In NetApp environments with on-premises ONTAP clusters, there was an important need for a product that could offload data securely, efficiently, and quickly. The best solution to meet those demands was NetApp AltaVault. AltaVault made use of deduplication, compression, and encryption to swiftly move data into the cloud at very low costs and with great simplicity. This would hold true, not only for NFS and SMB shares, but also for offloading data from ONTAP volumes using NetApp’s SnapMirror technology. AltaVault supports all the leading cloud storage providers—AWS, Google, and Azure.

The NetApp AltaVault architecture made it extremely useful for users. AltaVault could be deployed as a physical appliance or as a virtual machine that you would run on-premises and later also in the public cloud. For years AltaVault has been a leading backup and restore solution. To the regret of many organizations this product will meet its end of life in December 2023. This means Altavault end of support and end of availability are also on their way. Companies that are still using AltaVault will need to find a replacement backup solution.

The main question with respect to ONTAP environments: With NetApp AltaVault discontinued, is there a worthy successor?

NetApp Cloud Backup is a new service from NetApp that creates block-level, incremental forever backups and stores them seamlessly in object storage in either AWS, Azure, Google Cloud, or NetApp StorageGrid appliances. This is NetApp’s recommended replacement solution for AltaVault deployments.

Note: This Cloud Backup service is an entirely new offering from NetApp and shouldn’t be confused with an earlier alternate name for AltaVault, which was also called Cloud Backup. 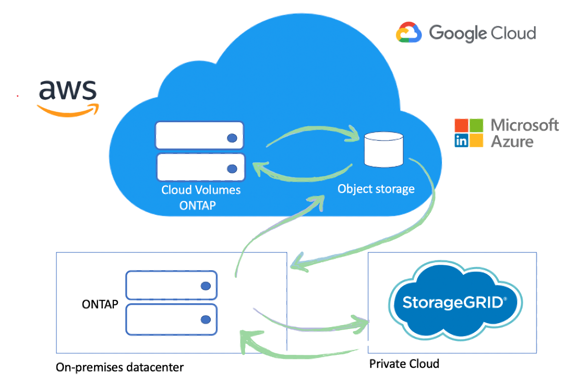 Cloud Backup is the simplest and most effective solution to backup ONTAP data in a native manner. One key component to Cloud Backup architecture will be familiar to any user of AltaVault: SnapMirror®. Like AltaVault, Cloud Backup uses SnapMirror data replication to back up your on-premises ONTAP and Cloud Volumes ONTAP data by creating incremental backups at the block level that are stored in object storage on AWS, Azure, Google Cloud, or in NetApp StorageGrid appliances.

Cloud Backup copies preserve all of the native ONTAP storage efficiencies that are used in on-premises ONTAP as well as in Cloud Volumes ONTAP clusters, from deduplication and thin provisioning to compression and compaction which can be. That means backups remain space and cost-efficient. Since with Cloud Backup you pay for the amount of data stored, the smaller the footprint the better.

There is also another benefit for strictly on-premises users of AltaVault: AWS, Azure, and Google Cloud. For companies that aren’t already using the cloud, Cloud Backup is an easy and low-intensity way to get started with one of the safest workloads to test out the cloud. For companies with a mandate to move to the cloud as quickly as possible, Cloud Backup can immediately get your data to AWS, Azure, or Google Cloud ahead of much larger and complex application migrations. It doesn’t matter which cloud you use if you’re moving away from AltaVault: Azure based Cloud Backup is the same as AWS and Google Cloud Cloud Backup. Also, for users who aren’t interested in leveraging the cloud, Cloud Backup is fully supported by NetApp StorageGrid systems and the Software only option for secured regions within ONTAP.

Cloud Backup creates block-level backups that are incremental forever. This makes your backup window much shorter and ensures that your backups are consistent with your source data, with less chance of data loss. Block-level backup backs up your data 10 times faster than traditional, file-level backup solutions, such as those that rely on Network Data Management Protocol (NDMP). Updates only affect changed data, which means less syncing between source and copies.

With Cloud Backup, restores are fast, with backups directly hydrated by the source ONTAP volume with no proxies involved. These restores take place at the file, or even volume level. By keeping metadata with the backup in the object storage bucket, restores avoid using additional storage for cataloging and indexes. Cloud Backup is also fully integrated with NetApp SnapCenter® to help create application-aware backups that are crash consistent.

Because Cloud Backup copies are stored independently from your ONTAP cluster, they offer more dependable protection than volume snapshot copies to recover your data. This is an instrumental part of enabling a 3-2-1 backup strategy.

All of the deduplication, compression, and compaction that takes place on your ONTAP system are retained in your backup copies. This not only reduces the amount of storage space that you’ll consume in object storage, it will also cut down on your transfer time, ensuring backups are quick and effective. This is part of the reason why Cloud Backups take up 97% less network bandwidth.

Cloud Backup offers end-to-end security using AES-256bit encryption at rest and TLS/HTTPS security in flight. The connections from Cloud Volumes ONTAP to the object store are based on a private network. And finally, encryption keys, cloud credentials and cloud management is controlled by NetApp.

Cloud Backup also currently comes packaged with a subscription to NetApp Cloud Data Sense, the AI-driven data governance tool that can help you identify sensitive types of data stored in your backups, such as Personal Identifiable Information (PII), which could require higher levels of security.

Cloud Backup is fully integrated into the entire NetApp ecosystem via NetApp Cloud Manager, the SaaS-based starting point for all NetApp cloud services. Cloud Backup not only works for Cloud Volumes ONTAP, it also integrates with on-prem ONTAP, letting you protect data seamlessly throughout hybrid storage architectures that span both the data center and the cloud. 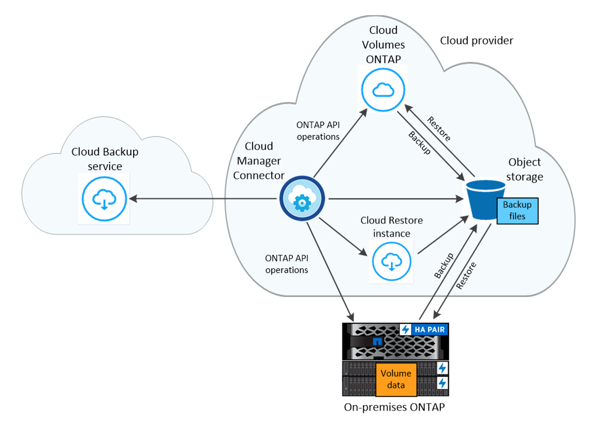 These features combine to make Cloud Backup the definitive solution to replace your existing AltaVault deployment. To help you plan, NetApp offers an online calculator to estimate the costs when using Cloud Backup to backup your ONTAP data.

Whether you use ONTAP in an on-premises cluster or in the hyperscale cloud, backups are a must. With AltaVault support and availability ending in 2023, what kind of backup functionality does Cloud Backup offer as a replacement?

All of AltaVault’s backup functionality is supported by Cloud Backup.

Cloud Backup offers long-term, cost-effective protection and disaster recovery, and protects against outages by storing the data in a separate environment from the primary/snapshot copies, which satisfies the 3-2-1 requirement. Also backups can live indefinitely even without a source volume. Like with SnapMirror relationships, you can restore your volume from the object store to a different volume then the origin volume.

See how Cloud Backup works in this video demonstration.

How One Company Transitioned from AltaVault to Cloud Backup

To see how the Cloud Backup replacement for AltaVault has already been put in place, let’s take a look at how it worked for one NetApp customer.

This major medical company headquartered in the US is leveraging Cloud Backup to replace AltaVault for backing up their on-premises data to the cloud.

The company regularly stores large amounts of data which would then be used to produce extensive and thorough analytics. To do this, they needed a solution with fast production storage and an integrated, reliable and durable backup method. The stored data needs to be easily and quickly retrievable.

This data is highly critical, as it involved information to improve patient care and treatment plans providing specialists with up-to-date and readily available information. As such, data protection is an essential part of their IT operations.

With AltaVault reaching EOL, the company did extensive research into replacement technologies. They found that Cloud Backup would be the best solution to replace AltaVault’s functionality for backing up their on-premises ONTAP data.

The benefits the company gained with Cloud Backup include:

AltaVault End of Life Is Coming. Cloud Backup Is the Solution.

AltaVault end of life is rapidly approaching. Cloud Backup is a worthy successor of AltaVault that offers long-term archiving and protection of production data, in a very efficient and secure fashion, for Cloud Volumes ONTAP clusters and on-premises ONTAP clusters. Its configuration and usage is of unparalleled simplicity.

READ ABOUT ALL THE BENEFITS IN THE FULL SOLUTION BRIEF HERE